So you woke up Tuesday morning, logged on to social media and thought, “What is an Al Sal?” Dear reader, an Al Sal is a mythical beast, much like a Chiron, that is known for having superlative abilities to train running demigods but—allegedly—way, way, way less noble. Nike Oregon Project coach Alberto Salazar has been part of running lore for decades and on Monday night, the U.S. Anti-Doping Agency semi-surprised us all by announcing a four-year ban on Salazar.

Why a semi-surprise? Well, because many people thought sanctions were in order in 2015 when Kara Goucher and Steve Magness first went public with allegations of rule-breaking at NOP in 2015 as part of the ProPublica-BBC report. 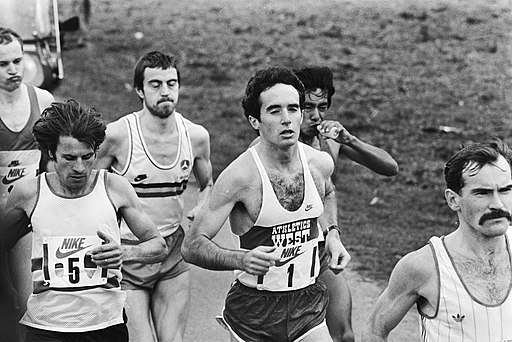 He moved into coaching after his professional career, including coaching Mary Decker when she qualified for the 5000m at the 1996 Atlanta Olympics. A urine test collected at the Olympic Trials in June 1996 showed a testosterone to epitestosterone (T/E) ratio greater than the allowable maximum of six to one. Decker and her attorneys argued the T/E test is unreliable for women in their late 30s (she was 37) who are taking birth control, but the IAAF banned Decker in from competition in June 1997. After some back-and-forth and arbitration, the IAAF stripped Decker of a silver medal from the 1997 World Indoor Championships 1500.

A few years later, Salazar headed to Beaverton, Ore., to coach Nike’s Oregon Project (NOP). Founded in 2001, the training group is based at Nike HQ and Salazar has been the sole head coach of the program — although seemingly more duties have shifted to other staff members since Salazar’s 2007 heart attack.

NOP has always done things… differently. Remember that weird mask Galen Rupp wore in 2011? Or the nose strips? Some runners in the group live in a house with filters to remove oxygen to simulate living at elevation, they use underwater and low-gravity treadmills, athletes are hooked up to electrodes to monitor their training load.

Sometimes scientifically-backed but always looking for what will give athletes an edge … but where are the gray areas? And where is the definitive line?

On Monday, USADA told us exactly where the line is.

USADA says Salazar trafficked testosterone, infused a prohibited amount of L-carnitine, and tried to tamper with doping controls. They’ve announced a four-year ban following an independent panel of the American Arbitration Association, which decided to punish Salazar and his colleague Dr. Jeffrey Brown, a former consultant with Nike.

But this whole thing comes about four years AFTER several athletes — including Kara Goucher, who left the group in 2011 — spoke out about what they believed to be violations by Salazar. Those alleged violations included testosterone, not surprisingly, but also thyroid and asthma medications that the athletes didn’t medically need but were thought to have possible competitive benefits.

Two years after that, USADA informed Salazar of the allegations against him… yes, in 2017.

Now, here we are. The ban was announced in the middle of the IAAF World Championships at which NOP athlete Sifan Hassan has won the 10,000 already and just two weeks before teammates Galen Rupp and Jordan Hasay are confirmed to run the Chicago Marathon.

Salazar issued a statement, saying, “Throughout this six-year investigation my athletes and I have endured unjust, unethical and highly damaging treatment from USADA.”

He plans to appeal.

However, as more news outlets have picked up the story, more details have emerged. The Wall Street Journal reported Tuesday that Salazar briefed Nike officials — including CEO Mark Parker — about his “experiments to manipulate the use of performance-enhancing drugs for track and field athletes.”

In fact, the reports released by USADA allege at least one of Salazar and Brown’s experiments was conducted in a lab at Nike HQ. That particular experiment was testing if topical testosterone cream would trigger a positive doping test. Testosterone is banned by the World Anti-Doping Agency.

USADA also cited exchanges between Salazar and Lance Armstrong about another supplement, L-carnitine, which is not prohibited but is regulated by WADA. People also questioned the 1-2 Mo Farrah and Galen Rupp finish at the 2012 Olympics, along with Farrah’s other late-career breakthroughs.

However, USADA panel remarked in its decision that Salazar made “unintentional mistakes that violated the rules,” and that he was “apparently motivated by his desire to provide the very best results and training for athletes under his care.”

In short, USADA says after four years they’ve concluded Salazar is a nice guy who made some mistakes.

Early Tuesday, Salazar’s athletes at the World Championships received emails and hand-delivered letters and told they could not communicate him. Salazar himself is barred from the facilities.

Since the announcement, former and current Salazar athletes have been largely silent — minus those who are at the World Championships in Doha and getting cornered, like Donovan Brazier, who said he was unaware NOP was under investigation (since 2015) or that Salazar had been charged with anti-doping violations (in 2017).

Clayton Murphy also claims no knowledge, saying all the allegations happened before he joined NOP. “We always competed clean ever since I started running and I never saw any wrongdoing at the Oregon Project,” he told reporter Cathal Dennehy.

Hasay weighed in late in the day, posting on Instagram, “Let them judge you. Let them misunderstand you. Let them gossip about you. Their opinions aren’t your problems. You stay kind, committed to love, and free in your authenticity. No matter what they do or say, don’t you dare doubt your worth or the beauty of your truth. Just keep shining like you do.”- Scott Stabile

Just finished my last hard interval workout before @chimarathon, 15x 1k! 🏃‍♀️💪
With regard to yesterday’s news, I want to convey that Alberto has been like a father figure to me and has treated me with nothing but respect, and the highest of ethical coaching standards. I wish him the best moving forward as I remain committed and focused towards racing the Chicago marathon in 12 days, and the Olympic Trials marathon in February 2020.”

Salazar’s appeal, of course. Seeing how his athletes perform at the World Champs and at Chicago. Seeing what those athletes decide to do now — stay or leave? Watching to see how Nike responds, which so far appears to be by defending Salazar while decrying doping.

Other athletes have posted their feelings, largely to champion their own sponsors and their own commitment to clean sport.

“Running form point A to point B used to be so pure, the ultimate test of self, and I’m sadden by those who cheat the system and give distance running a bad name,” Sarah Crouch posted on Instagram. “But I sure am glad to have a sponsor who promotes clean sport and a coach with the courage to stand against a crooked empire.” Steve Magness, Crouch’s coach, was one of the Salazar whistleblowers in 2015.

Over at NAZ Elite, Kellyn Taylor said she hopes to retire with her integrity if nothing else. “I guess you could say that I choose to lose over doing things that I find to be immoral and I’m more than ok with that,” she posted on Instagram. “All I know is that I’m doing it right and when it’s all said and done I can walk away proud of my efforts, my teammates’ efforts and the fact that we did things morally right here at @naz_elite.”

In his Morning Shakeout newsletter, Mario Fraioli wrote, “This will be an unpopular opinion but as far as I’m concerned, anyone who has ever worked with Salazar directly and competed for the NOP is suspect and should have their results stripped: Galen Rupp, Jordan Hasay, Matthew Centrowitz, Sifan Hassan, Mo Farah, Kara Goucher, everyone.”

He also notes that the Gouchers introduced Brown, the doctor also banned in this case, to Salazar.

There’s much more to be uncovered about this case, so stay tuned.

Started running in my early 20s and ended up running my first marathon 15 months later. Managed to break 3 hours in my 12th marathon. Pilates instructor passionate about the importance of your powerhouse in running and the mind/body connection. One husband, zero kids, mama to one Australian Shepherd.