Peeing. Everyone does it. I do it. You do it. Michelle Obama does it, the Queen of England, Mother Theresa did it, so did Joan of Arc, Kara Goucher, and Salty herself does it and gives advice about peeing when there’s no potty to be found.

Every human in the history of humans has peed. It’s part of the grand Human Experience. For most women however, and women athletes specifically, another part of that human experience involves struggling with this very essential and ubiquitous bodily function.

The struggle need not be so real. There has to be a better way and that better way might very well be a running skirt with a trap door. I’m not even joking.

One-third of women suffer from exercise-induced incontinence and another large chunk of us just need to pee a lot (darn you peanut-sized bladder!) Just a couple of weeks ago, I was copping a squat alongside the path on a run, my daughter sleeping in the stroller so I couldn’t go too far into the bushes, when a car zoomed by just in time to get blinded by the luminescent white glow of my asscheeks as I popped up, trying to pull up my skirt quickly, but failing because of sweat-induced friction.

Some women, at this point might say, just pull your shorts to the side and pee; no need to pull down your shorts! Well several Salty ladies, discussing the woes of peeing on the run, confessed to the reality of not having a straight stream. The majority of us have a stream that veers right or left so hard that completely pulling down your bottoms is indeed necessary. There must be a better way.

On race morning, there’s nothing better than watching the line-up of men facing the bushes taking a quick leak, while we wait in the marathon-long line to hover, quads-burning in a disgusting port-o-potty. That’s the real penis envy.  There must be a better way.

And, despite its promises, it’s not the Go Girl“female urination device.” The Go Girl is a pink (ugh) silicone funnel that allows you to stand and pee. Hmm. Interesting concept, but problematic for runners on several points. The most obvious issue is that you have to carry it. Racing with a pee-splashed mauve funnel hanging off my hip is not something I see myself doing … unless it was designed to look like an anatomical penis, in which case that would be hilarious.

Even if you just have it in your purse for a long day of shopping do you really want your FUD in your purse, even in a zip-lock bag? I can imagine it dropping out of my purse while looking for a pen at the checkout, and the poor guy behind me picking it up and then dying as he realizes he’s holding some sort of urination contraption. Another issue is its disposability factor. Go Girl says it can be reused (eww) or you can buy in bulk and consider them disposable. Oh, the poor landfills. Ladies, there must be a better way. 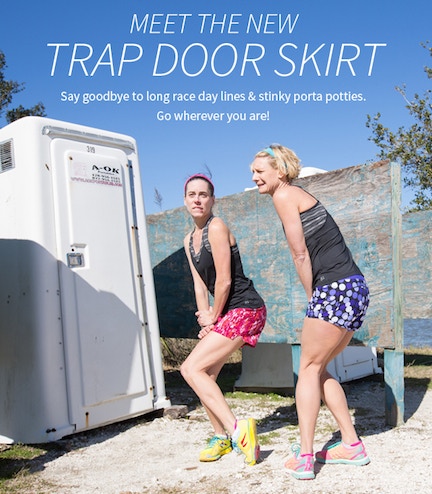 Presenting … the Gotta Go Running Skirt by Skirt Sports. Beginning as an April Fool’s joke, this running skirt’s design makes peeing for ladies as easy as having a penis. After customers begged them to offer the trap-door skirt for sale, Skirt Sports realized there was a real need for the product, but to create it they needed to raise capital. They launched a Kickstarter and have raised nearly $44,000 with 6 days to go!

The Gotta Go Skirt is a high performance running skirt with a trapdoorflap on the shorties with a “low-profile” hook and loop closure. This flap ensures you are fully covered and opens to give access to the relief hatch. The relief hatch is an opening in the shorts for actual urination, and stays shut with low-profile velcro.

Woah, there! Velcro that close to my most sensitive areas?! I worried about that myself, until I dug a little further; the velcro is high up on your lower abdomen, meaning non-pube-grabbing for even the bushiest of ladies. The hatch is anatomically aligned with your “lady bits” to “enable error-free evacuation” when you squat. The skirt itself has slits that allow plenty of leg-room when squatting, three stash pockets (yes!!), and is pad-compatible (eww, but yay?!). Ladies, there must be a better way, and … This. Might. Be. It.

Now, I know that many of you aren’t into running in skirts, period, let alone skirts with crotchless shorties for easy access. I can attest that skirts adorn many a running bad ass, like mine. I like to train and even race in running skirts because I like the way they look better than shorts, the skirt hides the pee leaks (two kids, what can I say?) and it also covers my non-elite-runner’s ass.  Oh, and I enjoy chicking men more in a skirt, especially if I do so while snot-rocketing.

For me, the Gotta Go Skirt combines the best in running comfort and style while helping women athletes who suffer from exercise-induced incontinence or a crooked stream. For running and racing, it also makes whizzing a whiz. If you’re running with your BAE (I hate that term but am trying to stay current) that hatch might come in handy for some other activities as well. Ahem.

If you want more information or to support Skirt Sports in bringing the Gotta Go Skirt to the market, head on over to their Kickstarter page!

And Skirt Sports, if you’re reading this, I’ll gear-test the piss out of one of your skirts!

So how about you readers? How do you handle the pee during a run? Do you run in a skirt? Would you buy a Gotta Go Skirt?

I'm an elementary P.E. teacher with a long-term, ongoing marathon addiction.The next big goal? Keeping up my BQ streak while aiming for a 3:10! I write about the not-so-glamorous side of running and fitting in serious training with a family while staying sane(ish).