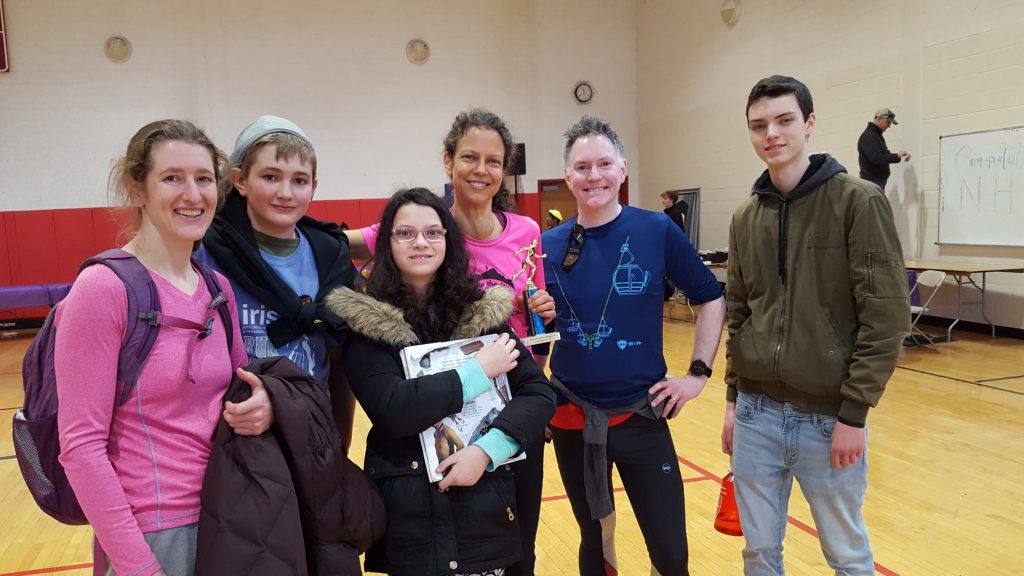 I’m spending the spring training for shorter distances, even foregoing the chance to run the Boston Marathon again to do so. I’ve been training hard for this short distance stuff. I raced a 5K on January 1st, but hydrating with champagne and fueling with chocolate-orange challah the night before proved a sub-optimal strategy. The Run for Refugees 5K would be the first real test of the new training approach.

I volunteered at this race in 2017. It was a bright spot during a miserable winter of injury and lost election blues. The race has an incredible feel-good atmosphere and a flat and fast course. Two friends came, so we had a little gang!

I asked my family to come along because I knew they would enjoy the race, but also because I really wanted their support. Having them there can help me run my best; it’s that simple.

I felt very good in the days leading up to the race, and I managed some promising workouts. Coach Mick and I worked out a pacing plan where I would run the first mile in 7:30, the second in 7:15, and give it whatever I had left for the third. For the second part of the race plan, I wanted a series of words, mental cues, for each mile. That’s a technique I discovered last summer as part of my Short Distance Spaghetti Project. The words give me something to focus on while I am running, almost a meditation of sorts. I fairly quickly came up with “control” and “all in” for the first two miles. The first was to avoid going out too fast and the second was to be sure I committed to the race when things got hard. After some brainstorming, I came up with “fly” for the third.  “Fly” is just the feeling I was looking for – the sense of power I am sometimes able to capture on the track. It reminds me of a lyric from “Rewrite the Stars” – “All I want is to fly with you.” Steph Bruce, one of my favorite elite runners, runs for Hoka One One and their motto is “Time to Fly.” Plus, there’s Gandalf’s line in the Lord of the Rings: “Fly, you fools!” So then I had it: Control, All In, and Fly! 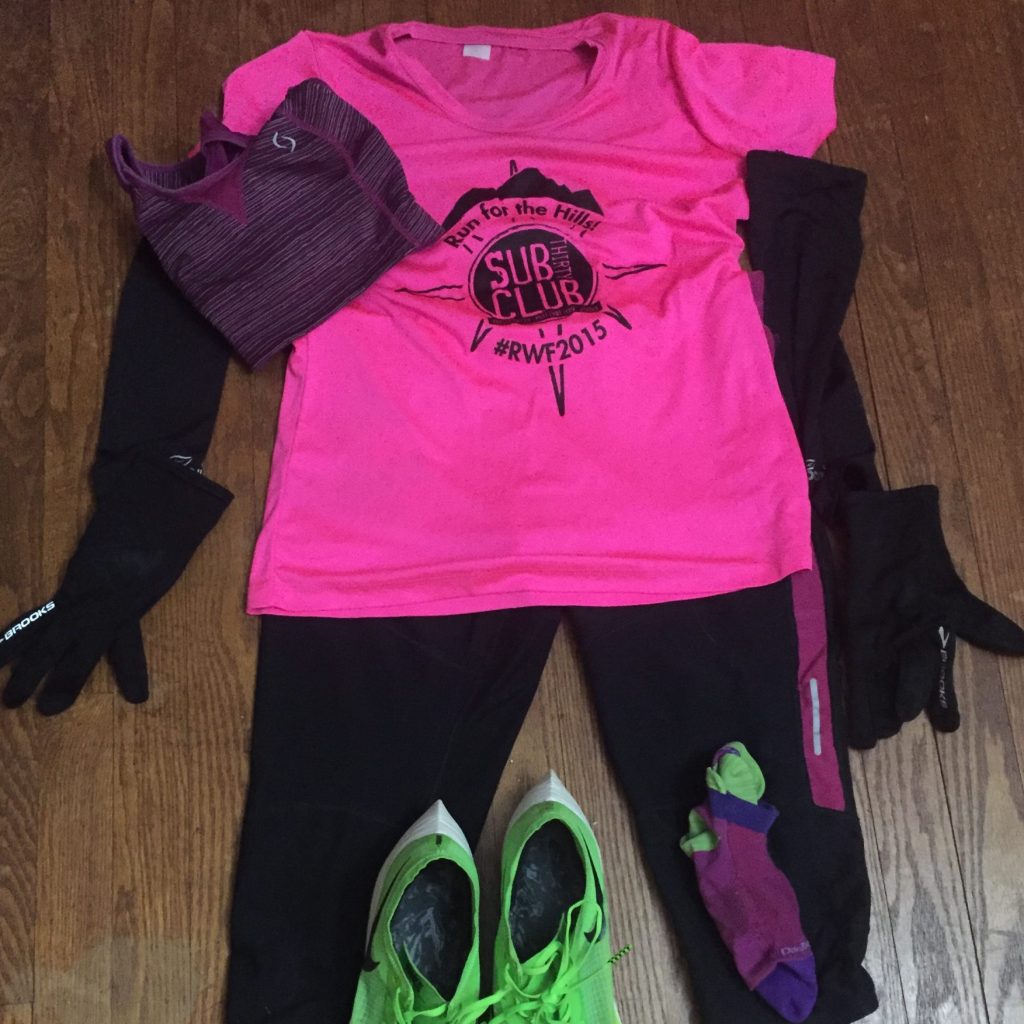 I have so little experience trying to run 5Ks seriously that I wasn’t even sure what to eat before the race, or if it mattered. High Power Running Mentor #1 advised a more or less regular dinner and breakfast: no spicy foods, some carbs but no need for a huge plate of pasta or a double portion of oatmeal. I had my usual oatmeal plus two cups of coffee when I got up, a banana in the car about 2 hours before start time, and two Jet Alert tablets an hour before the start.

The weather on race day was mid-30s and sunny, with a very light breeze. Perfect go-fast weather! Because the whole family was going, we got up early with loads of time to spare. We picked up my friend Snarky Girl and her son, Leon, and we were on our way.

We arrived at the race quite early so we had plenty of time for bib pick-up, extra bathroom stops, free Starbucks for the kids, and for Leon to sign up for a last-minute volunteer gig. Coach Mick gave me detailed warm-up instructions for this race, suggesting that I run a couple of easy miles and then 4-5 minutes at race pace (7:20).

When I felt antsy on the warm-up, I reminded myself: you have a lot of caffeine in your system. That feeling is excitement plus caffeine. That’s all on track.

My meditation practice was also very helpful in staying calm and focused in the hours before the race. I’ve been using my believe mantra bracelet as an “object of focus” – what the Headspace app calls it – and that totally worked. When I started to feel *too* antsy, I brought my focus to the bracelet and that helped me calm down.

At 9:45 a.m., I took one last quick trip to the portaloos and I handed my jacket off to my husband. It was a bit warmer than expected and I shed my arm warmers and gloves as well. I headed to the start with a friend who planned to run with me for as long as possible.

Lining up was a bit of a puzzle. I had heard that this race could be congested so I wanted to be as close to the front as seemed reasonable. I asked some college-aged guys what they were hoping to run and they said around 20 minutes flat. Okay, a little further back for us then. I spotted someone from the Manchester Running Company who was likely to be close to my pace so we lined up with her. We were not that far back and I thought we would be fine, but  – spoiler alert – we were too far back.

The start of the race was beautiful. Because the race is sponsored by IRIS (Integrated Refugee & Immigrant Services) a lot of politicians spoke, from the mayor of New Haven to the Lieutenant Governor. Then a former refugee who had received resettlement help talked about how no one wants to be fleeing their homeland. She said she had asked herself every day – why is this happening to me? But when she arrived in Connecticut, she got the help she needed and now she’s doing well here. The Yale gospel choir sang Emma Lazarus’s sonnet from the Statue of Liberty, set to music. It was really just lovely. Then, of course, the gun finally went off and we had to start running!

The first section of the race was incredibly crowded. Coach had said not to fret about possible congestion so I rolled with it. I was pretty sure we were slower than 7:30, but I figured space would open up. My friend had briefly run with me, but I lost track of him. Coming around the first corner, I heard Leon cheering for me. He had gotten himself a job as a course monitor! When I glanced at my watch, it said 7:50. COME ON. I needed to move faster! No dice… no space. This race was falling apart in the first five minutes. The first mile split clicked off at 7:52. Ouch.

I had to decide what to do and it flashed through my mind to jog it in. There was no way I was getting under 23 minutes now. Probably a PR was also out the window. The other friend I’d come with said she was running three easy miles on a beautiful day for a good cause. That sounded mighty attractive, but I knew how crappy it would make me feel afterwards. How ridiculous would I sound explaining that choice to Coach Mick and HPRM#1? Plus, my whole family was here to see me race, not to watch me jog about in the sunshine.

Then I remembered that one of my main goals with these short distance races is to learn what I can; I wasn’t going to learn much by phoning it in. I remembered what I chanted to myself in Philly: process, process, process. Then I thought of my word for the second mile: “All In.” Not “Abandon Ship Because The Course Is Crowded.” I decided I could still run two good miles and that’s what I would try to do.

Game on, then. I got a tiny bit more aggressive about finding a path through the crowd and tried to crank the pace down a little. I knew I needed to be hurting a lot more than I was so I went hunting for that edge where the pace feels like almost too much. I did not look at my watch much but at one point I saw 6:55 (!) and then 7:10. I seemed to settle in around 7:10-7:20, which felt right, and I ran most of the rest of the race by feel. I knew where the turns were, and I tried to run the tangents. It was still crowded, but at least we were moving more quickly.

Just before the two-mile mark, I passed my family! My husband had brought his homemade banner so they were easy to spot. A group of walkers carrying a big bouquet of blue balloons passed me still heading out and I thought, how great would it be to just turn around and walk with them?

But no, this was now mile three and time to FLY. I did not think of Gandalf or Steph Bruce or feeling powerful on the track. I only thought of my coach saying, “You can run fast a lot further than you think you can.” Time to find out! I ran past Leon, around the top of the park, and headed down the last straightaway with the tiny evil hill. One glance at the watch told me 2.58 miles, so I had just about a half mile to go. I counted up to 58, back down to zero, up to 50 and down again. At the three mile mark, someone was calling splits and I heard “22:20.” How fast could I get to that finish line?

After my sprint to the finish, I crossed the line and stopped my watch: 23:02! Not sub-23, but still a PR! I found a telephone pole and just leaned against it, waiting for my husband to find me. After catching my breath, I assured him that I was fine. We saw my friends finish and started to gather the troops. I really wanted my official time so we trekked into the gym and practically snatched the results from the hands of the poor woman hanging them up. 23:20 gun time. Hmmmm. That is *exactly* my prior PR. I asked about chip times. She didn’t think the race did chip times. That seemed odd since there was a chip on the bib and I knew prior years had had chip times. 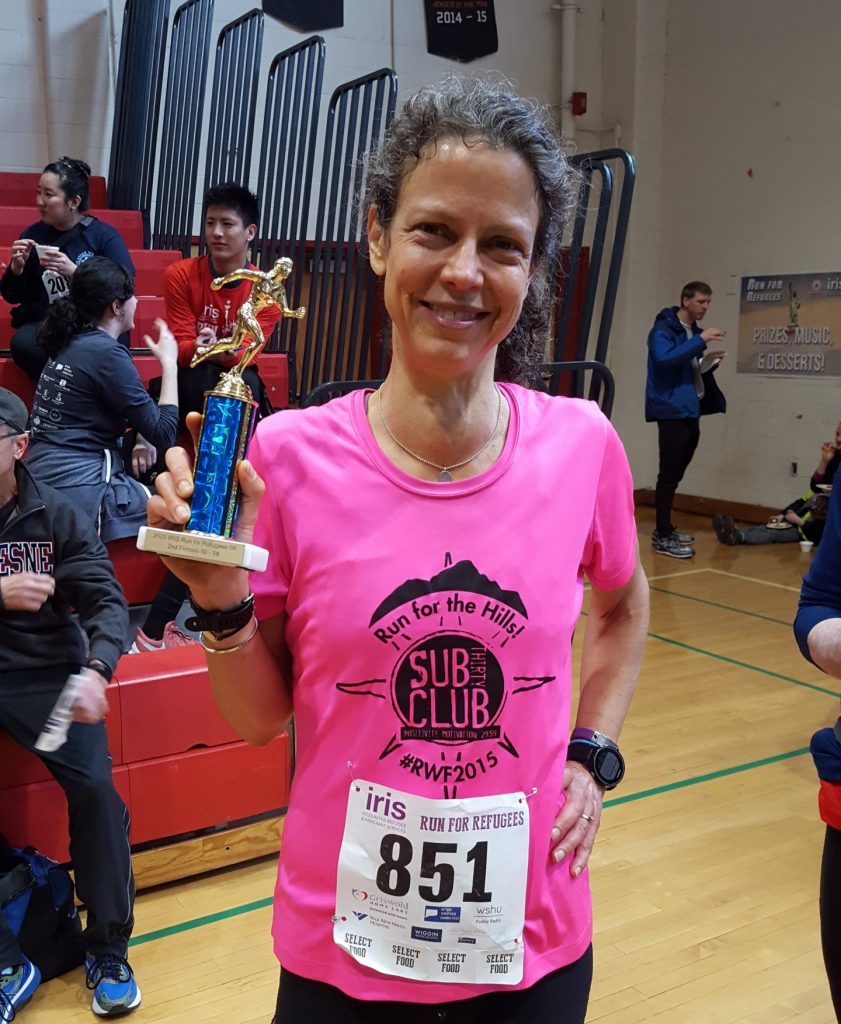 I decided not to worry about it. 23:20 is still a great time and I wanted to enjoy the post-race festivities. We went to the room where the food was and got into a line for falafel and baklava. Partway through the wait, they called out the awards for women, ages 50-59. I was second! Of course, I was very happy though I admit, I’ve been second a lot. I’ve only been first in my age group twice so that’s still a huge thrill. But then I saw the awards. Trophies! I seriously doubt there are many six-year-old soccer players in the world happier about their end-of-the-season trophy than I am about my Second Place Run for Refugees 5K Women Ages 50-59 Years Old trophy.

I didn’t play sports as a kid. Okay, one season of soccer, but back in the 1970s, you didn’t get a trophy just for playing. I’ve never won a single trophy before in my whole life for anything at all. I am SO HAPPY about this silly trophy. I might sleep with it – who knows!

To be honest, I don’t think it’s that silly to be excited. I’m working really hard to run fast. To win anything at all, to come in second even, to take home a trophy I won for running fast – this still completely blows my mind.

On the way home, Snarky Girl looked again to see if the race had updated results and they had. 22:58! Just under 23 after all! I had told myself I really didn’t care, but that was not true. I was SO happy to break 23 minutes! I’ve been beaming ever since! Maybe 5Ks are not so bad after all….